Tophaceous Gout is a serious stage of gouty arthritis. There is a strong indication that either you have avoided medical attention, or the advice you have received is completely flawed. You must seek rapid, maximum lowering uric acid treatment (within the bounds of safety). This will shrink tophi over several months, but if this is not soon enough, you may need surgery. See the tophaceous gout guidelines for more tophi information. 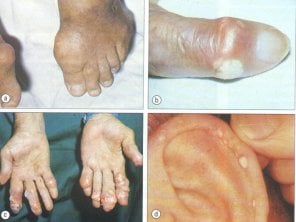 Why are tophi important to gout sufferers?

Why are tophi important? Gout sufferers care about the severe pain of gout attacks, but a single tophus is usually painless. So, what exactly are tophi, and why are they so dangerous to gout sufferers? Tophi is the plural of tophus. A single small tophus is easy to miss, but they grow and clump together, forming large lumps of many tophi. They are not usually painful until they burst skin. Eventually, they grow worse, destroying joints and damaging organs. You must not ignore these lumps, so read on to see […]