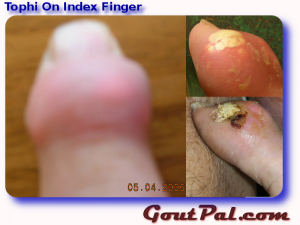 This photo collage represents the progression of tophaceous gout in the finger.

The largest of the photographs is from May 2006. I do not know how long this had been swollen, but the contributor notes that the skin had not broken at that stage.

The upper right of the photographs is from August 2009. Although the skin had still not broken at that stage, solid tophi are clearly visible and the contributor decided to take matters into his own hands and lanced his finger.

For safety, it is much better to consult your doctor, but this particular gout patient had long become disillusioned with his medical care. One doctor maintained that his uric level of 9mg/dL (0.54mmol/L) was acceptable.

I saw a total of 6 doctors between 1984 and 2010 (not to mention the army of 8-10 when I was in the emergency/hospital with my open wound infected left big toe) and NONE of them put me on a gout-management plan or explained the seriousness of [uric acid] crystal build-up in my body.

The lower right of the photographs is from May 2010. The contributor reports intermittent oozing of uric acid crystals for many months, but there is a happy ending.

With a new doctor on board, febuxostat (Uloric) was prescribed, and his condition is much improved.

If you have photographs of tophi, or any other gout-related images, please share your gout pictures. The easiest way to share, and ask how to fix your tophi, is to start a new discussion in the gout remedies forum.

Get treatment for gout to remove tophi before your index finger looks like this!