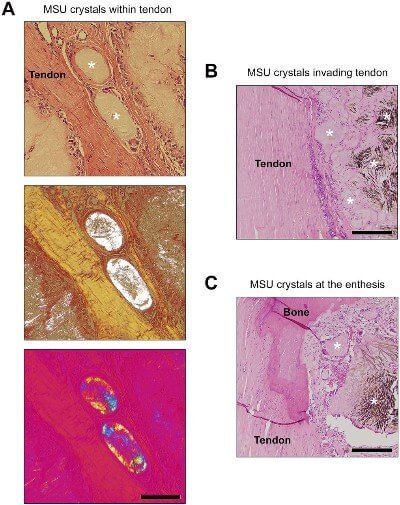 This gout crystals & tendons report is a layman’s summary of an investigation into the effects of uric acid crystals on tendons, presented at the 2012 American College of Rheumatology meeting. I have added a note about the peer-reviewed version published in the April 2014 edition of Annals of the Rheumatic Diseases.

Gout crystals is another name for uric acid crystals. These form when uric acid levels in the blood are too high to remain in solution. Uric acid occasionally forms pure crystals, but usually bonds with sodium and other elements to form urate crystals. These are attacked by the immune system to form the common acute gout flare. Gout crystals also grow into bone, cartilage, and tendons resulting in permanent damage.

Tenocytes
Tenocytes are the cells that form tendons. They produce collagen molecules, which bind together to form tendons.
Periarticular
Periarticular means surrounding the joints. The art in periarticular is the same art in arthritis. Thus, gouty arthritis is swollen joints from gout.

We used to see uric acid crystals in joints, only by extracting joint fluid and viewing it under microscopes. Now that advanced imaging techniques show uric acid crystals more clearly, we can also see them in tissues surrounding joints.

Specialist cells near joints are destined to become different structures within joints. Some will become bone, some cartilage, etc. This study deals with tenocytes, which will become tendons – assuming they survive the onslaught of uric acid crystals.

The purpose of this study is to investigate the effects of uric acid crystals on the ability of tenocytes to live and succeed in growing collagen for tendons.

Cells were grown in laboratory cultures, including samples with different concentrations of uric acid crystals.

The reactions of tenocytes in the presence of uric acid crystals are:

Following the presentation to the rheumatologist meeting, the gout crystals study has now been published as “Interactions between tenocytes and monosodium urate monohydrate crystals: implications for tendon involvement in gout”

It re-emphasizes the points about tissue damage from gout crystals in or around joints. Uric acid crystals reduce the ability of the joint tissue to repair itself. They also grow into tendons where they attach to bones, and into the tendon itself.

Joints are therefore weakened, but we gain an insight into the power of our joints to repair themselves – just as long as we take action to remove uric acid crystals.

Generally, we can reduce uric acid to safe levels. The sooner you do this, the better, and try to get uric acid well below 5 for a few months to speed up the rate at which old gout crystals dissolve. If you are not sure how to do this, or you want help understanding the processes revealed by this gout research, then please ask in the gout forums.

If your gout has worsened to the point where you suspect tendinitis, it is probably time to find a rheumatologist.